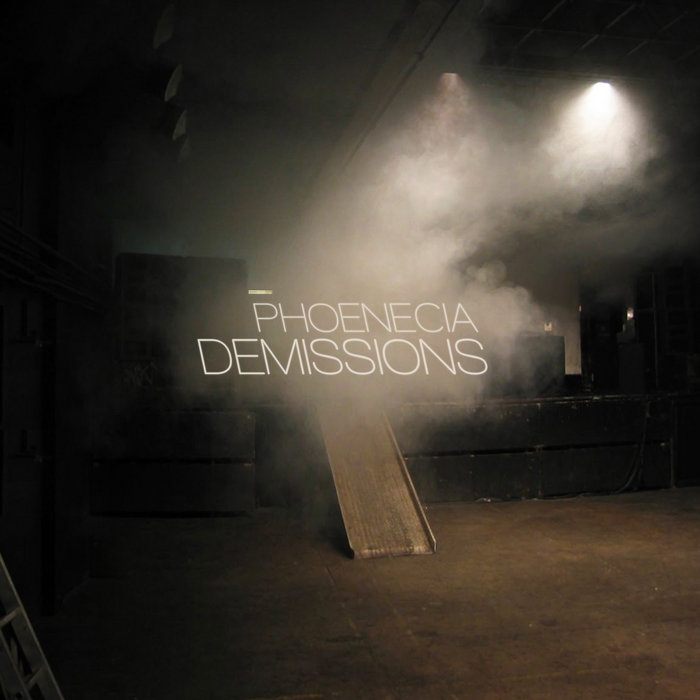 Demissions is the album every in-the-know electronica fan has been anxiously awaiting for the last ten years. Phoenecia, the duo who put experimental electronic music on the map in the US with their Soul Oddity releases, their infamous Schematic label, their early releases on Warp and their brilliant albums Brownout & Echelon Mall, are back with new album destined to be as ageless & influential as any of their previous contributions. What strikes the listener at first is how seamlessly the songs throughout the album integrate acoustic percussion with electronics, most notably on the twelve-minute epic first track "Two-part invention for Bodhran & Computer". Some tracks sit at the near end of biological chaos, some closer to clean & structural reason, nevertheless, each song seems to narrate a different chapter from the same story, never straying too far from the central theme.

Demissions nimbly traverses the gaps between techno, electronica, ambient, industrial and noise, all the while rarely reminding the listener that they are actually listening to electronic music. All of this makes it difficult to categorize, but not difficult to listen to, and though the music seems well aware of it's influences, it's just too awkward a child to sit comfortably beside any well established genre, camp, or collective. The result is a surprisingly fluid piece of work that plays like a contiguous, mood-driven soundtrack - A long-form concept album custom-made to satisfy the neglected legions of critical electronic music lovers with high ideals & short-attention-spans.

"Demissions is far and away one of the best albums of 2011. In typical form, Phoenecia always delivers amazing sonic cerebral experiences that never disappoint. I don’t know how they do it." - Richard Devine

"I can almost forgive Rom + Josh for making us all wait this long... the whole album is incredible, it puts a big smile on my face to hear the return of the Miami masters… It's such an accomplishment, great sound design, great jams, I put it on and people shut up and go ‘what is this?’ with eerie regularity” - Drew Daniel, Matmos / Soft Pink Truth

Appropriating their name from the first culture of the old world to explore the new, Phoenecia, aka Joshua Kay & Romulo Del Castillo, was inaugurated in Miami in 1997. The pair previously recorded under the Soul Oddity moniker, releasing an album & a series of 12-inch singles for the US major label Astralwerks. In late 1996 they founded Schematic Music Company, the infamous record label which would go on to carve a distinct niche in the landscape of modern music by debuting Scott Herren (Prefuse73, Savath & Savalas), Otto Von Schirach, Richard Devine, Push Button Objects, Secret Frequency Crew & releasing collaborations with Matmos, Autechre, Jamie Lidell, Matthew Herbert, Jandek & Glen Velez, amongst many notable others. In 2001 they released a full-length album entitled Brownout, which in the words of the late Tim Haslett was "Phoenecia's magnum opus, the place where the ideas found in the preceding records are allowed to come to full fruition". It was also remarked that the album was "cinematic, but primarily in the respect that the tracks are heavily influenced by the sound design of film, as opposed to the score". This marked a decisive break from their past & set the trajectory for the sound they would continue to develop over the next 7 years, which consisted mainly of exhibitions, film soundtracks, remixes, compilation tracks, & the work comprised in their latest albums Echelon mall & Demissions.

Published by Light Of Man, BMI